The first of a new series on sound. Alt. links: Apple Music or Spotify

An undisclosed island. He was on paradise, enclosed. Clothed in sand-lined pockets sewn onto sand-colored pants.

Nightfall in the cabin strikes the way the villagers do their bamboo with hand-ground axes to a rallying cloud of volcanic dust. A light island train trickles down the half-piped bamboo gutters lining a clean rubble road.

Fires twinkle in windows twixt the tall rice grasses rolling whispers down terraced hills. A small black bug looks up at the biped above or appears to the way one looks at the sky when the clouds shift ’fore continuing their own scurry.

The man is heavy an’ light, lifted from the neck like a diner syrup lever to press on amid unfamiliar trotting ground. Suppose it’s good here.

The man’s hungry, further off-road down-stream done rambling ’til light’s apparent in the distance. One chance at food this night. A parent in the distance, that sign with a plate and lotus and tall tiki torches splashing glow onto entrance rocks rounding up to the terrace.

The man’s decided here he’ll eat. The man’s me and I take a seat where the one waitress wipes confusion off a tired, friendly face with one swath splay of the menu. A stranger sits far back, outta sight, sipping a stick of tobacco. His embers dance in the distance against a deep black jungle wall, buzzing.

The night-dwellers, friends of the fag-dancer, flip conversation across another round table in the grass. I’m into my colorful meal.

She comes by again, dream-like archetype, the type to take you from one wistful slumber plot to the next an’ never to be seen in that form again.

Now I’m scarfing a shrimp dish and hear this and get slammed by the heat of that rice doused in that question and thunder a thick reply from a throat satisfied by what it’d needed for some time until that moment. She was talking about the dinner.

As she grinned that kindly mouth-slice reserved for anonymous clientele and took plates and dashed noiselessly away, the man stared out across waves of rice. He’d eaten a whole field o’ that tiny tasteless fruit from the fringe of a tall green spire among maybe millions. 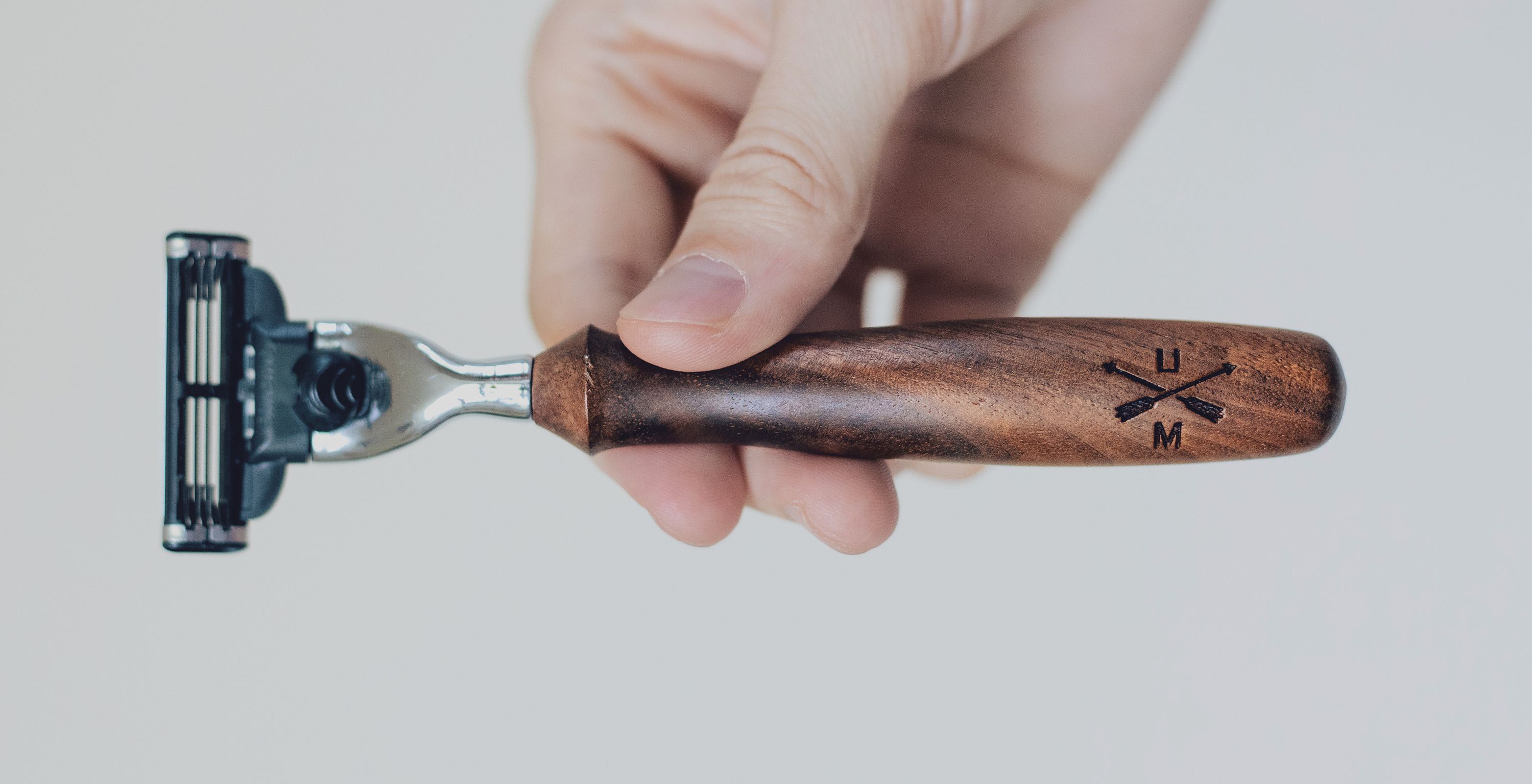 I, like Frank, consider the smell of unsmoked tobacco a momentary indulgence. I don’t purchase nor carry tobacco for the purpose of smelling it. But having smelled it before and revelled in its particular olfactory essence, I do appreciate the nostalgia it evokes of nonexistent times filled with deep thinking and even deeper gashes in firewood piled aside some cabin.

The razor held so delicately above both overtly looks and feels like a cigar. It was, at some point in the dearest past, crafted by Ursa Major.

This post is kinda sponsored. I didn’t get paid for it but received the razor handle aeons ago for promotion on my now-defunct television show. The product didn’t make it on air back in the day and it’s been plaguing my conscience ever since. If I were to ever be spiritually abducted into the realm of purgatoire de l’auteur, this should serve as karmic remittance.

I checked Ursa Major’s site and couldn’t find the razor. This is damn embarrassing. Alas, without knowing price nor description, I’ll tell you a bit about this fine piece of face-shearing wood. Perhaps you’ll find yourself perusing their skincare products and I’ll feel a smidgen better about putting off this review.

I despise ads and wouldn’t dare clog my beautiful blog with them. I put links to Ursa Major above in case you’re genuinely interested in ’em. They have an affiliate program but I am not part of it and these are not affiliate links.

It’s quite odd to show me shaving because the Ursa Major razor ain’t a razor at all—it’s a razor handle. That’s it. A lil’ piece of wood. It almost doesn’t make sense as a product, which is maybe why they ditched it in their lineup. Until it does make sense.

That wood feels good. It’s minimal, earthy, and decently designed. I’m all for buying sustainable, practical tools that match my vibe (or aesthetic or whatever). Ursa Major didn’t touch the functional part because they know others do it better. You can pop on and off disposable Gillette tops as you see fit. And that’s all there is to it.

Though the handle’s a bit of a collector’s item now, its simplicity says something about the company. Ursa Major cares about biodegradable goods that feel good to use and look good to have. Sustainable design. Do their personal care products cost a premium? Absolutely. Is that inaccessible price tier indicative of the quality of the potions inside the modern-outdoorsy designed canisters? That’s for you to decide. I lean on the side of niche-audience marketing in a subversive neo-capitalistic hellscape. Nah, the potions are cute.

Hey, I like our environment. I’ll back a conscious company any day. The Ursa Major razor handle reminds me of a quality leather wallet—an investment in lasting kit that’ll age right along with you. But my wallet’s not the size of the tree that was felled to make that handle. As a careful consumer I’d opt for a similar, more cost-effective brand like Tom’s of Maine. Come to think of it, Ursa Major is a Vermont brand. It could be Vermont’s answer to Tom’s of Maine. Could be I’m unaware of some turf war between New England personal care brands. In that case, before I become a plaid-donning political prisoner, know that I stand by Ursa Major’s site design over Tom’s. It’s much cleaner and the bear logo is substantially more huggable than my own name in stamp form.

Here’s one more photograph of me and the stubble cigar. My brother took all of these—thanks Kevin. 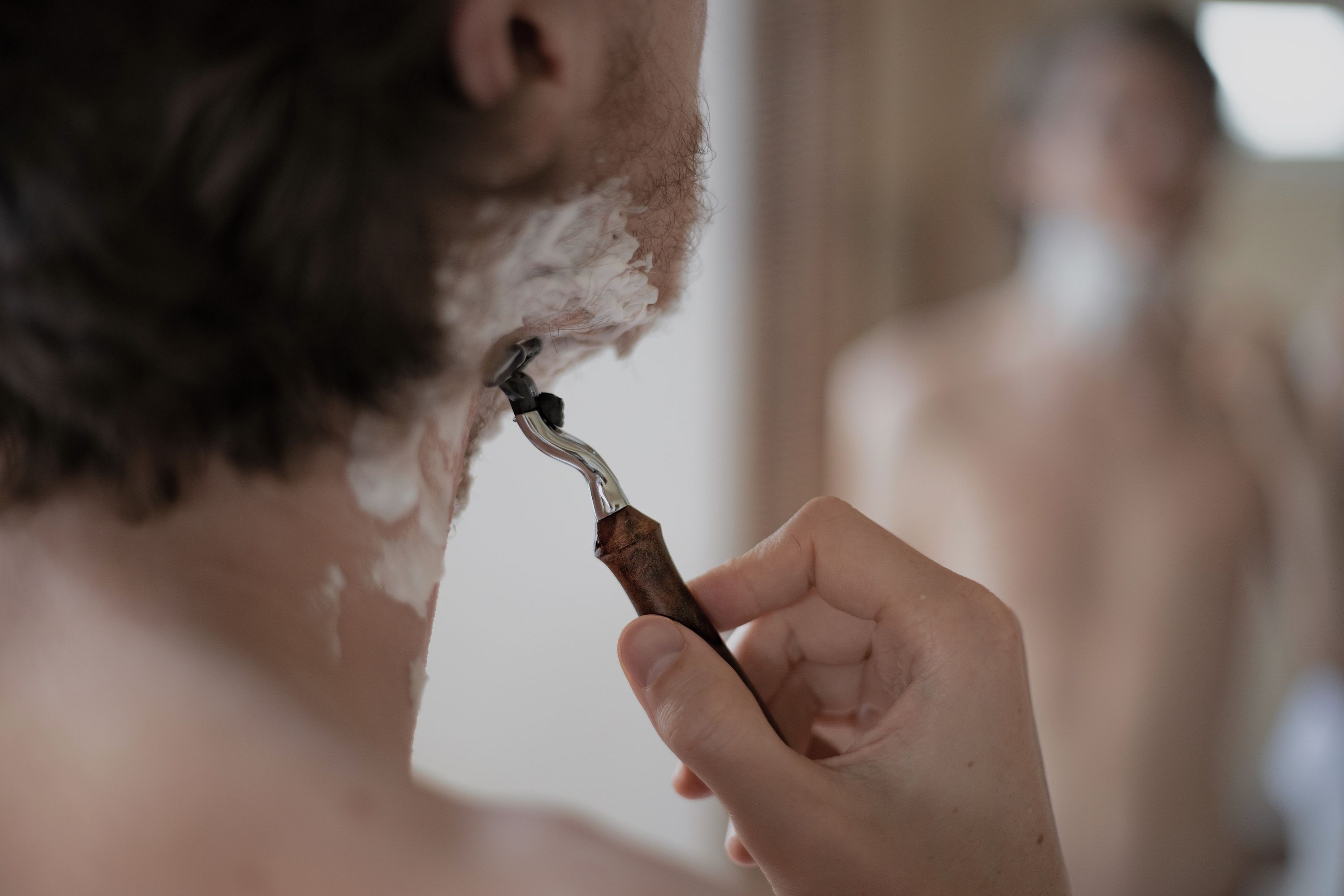 Sometimes you look at a word and it speaks to you.

I recently ramped up work with Gikken, a Berlin-based boutique Apple software company. Alex from Gikken introduced me to a newsletter called Dense Discovery. Upon reading Dense Discovery this evening, I tripped over an American indie magazine called Fifty Grande, wherein I was drawn to an article about folk artists living out of a van. I thought: “Hey, that’d be pretty damn cool to live out of a van.” It’s a thought I’m sure you’ve humoured at one point. In that article, I read the word congestion. It spoke to me.

Why is congestion speaking to me? It’s kinda gross. What does it connote? Mucus? Traffic? Blockage? I’ve dealt with an embarrassing amount of glottal mucus all my life, having been raised in an agrarian suburb. We’ve taken a turn for the intimate.

No, these superficial connections were not, in this instance, what first came to mind. For some reason I read that word like it was brand new. Thought of the raw meaning of it—what might be a definition stripped of allegiance to any particular congestive circumstance. I got all philosophical.

I studied comparative religion in college. My brother asked me on a walk today whether I’m an atheist. I won’t get into that here. Brought this up because my philosophy of religion courses used ancient allegories to illustrate spiritual concepts. Once meditated on a blueberry and felt it more intensely than certain prior sexual encounters. Blueberries’ll do that to ya.

Congestion is something we deal with incessantly. Congestion of the mind. I’m not sure where I’m going with this but I’m trying to unearth something via writing. Little thought purge. Ain’t that what they recommend?

Making sense of it

Nothing makes sense—that’s why it’s called making sense. You ought to manufacture the sense yourself.

Let’s agree that it’s temporary. Shouldn’t congestion then be relievable? It often is relieved. Can that relief be facilitated manually? If we are discussing mental congestion, then surely it may be. Phobia, for example, causes a congestion that takes gradual chipping away at to allow for the passage of… well, some inverse2 of fear. Writer’s block, however, simply takes:

It’s time to sleep. If you too are due for a snooze, may we both awake without congestion, mental or otherwise.